To live, breathe, eat and drink on water in the city. 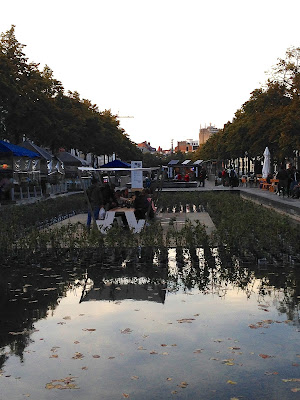 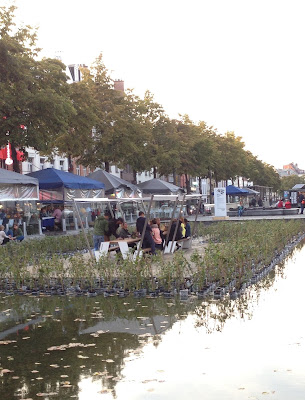 The "mini living breathe' installation, at the occasion of the Brussels Design Days in September, near Place St Catherine, Brussels
"An island in a large water feature on the Vismet in the centre of Brussels which encloses a large round sharing table for inhabitants to use. The installation uses its own natural materials to filter and clean the surrounding air in order to revitalize the people and the city. This piece of work embodies the idea of shared city living within a compact footprint"
http://designseptember.be/project2016-uk-480-18.html
No comments:

The Viaduct by Paul Delvaux - 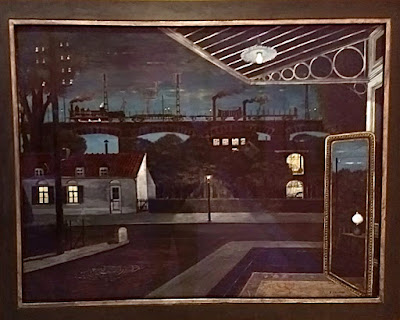 "This work was painted in March 1963, a period in which Delvaux again felt strongly attracted to the subject of trains and stations, which he discovered very early on in his career. Towards 1920, at the time when he was attending the Académie, he got into the habit of painting at the gare du Luxembourg in Brussels. Later, he drew inspiration from the little foresters' station in Boistfort, the borough of Brussels where he lived. Evoking Delvaux's world without referring to trains is impossible, since it is a recurring theme in his work. Here he reveals himself as a painter of reality, of a meticulous reality. In Delvaux, no detail is left to chance, and each element is studied in depth. In fact, he ordered scale models of trains and trams which reigned over his studio, next to a skeleton, another important source of inspiration. That way, every time he wished to do so, he was able to copy them carefully and integrate them in his works. The Viaduct is a very interesting piece, because it gathers in a single, very dense composition, all the elements which constitute the artist's world: the suspended lamps found in his childhood homes, the magical and unusual atmosphere of the stations at nightfall, the mysterious train passing and covering the horizon with its strange smoke, the mirror reflecting another world, another reality. And absence, too. Everything is fixed, inanimate, waiting for an event which does not take place. The work frightens and at the same time fascinates, since it is inhabited by poetry. The houses are lit, but no human being seems to live in them. No life animates this composition constructed like a theatrical scene".
https://www.museothyssen.org/en/collection/artists/delvaux-paul/viaduct
No comments: