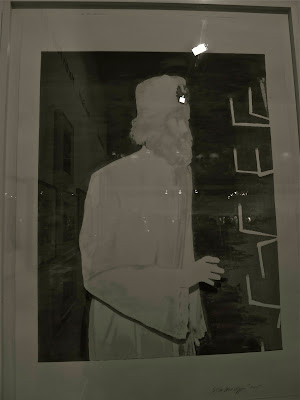 I already mentioned Luc Tuymans before,  in my posting of March 30 at the occasion of the retrospective of his works in Brussels' Bozar.
This is something totally different. The worshipper by Tuymans  was shown at Paris Photo last month.
The artist said the following about this work during an interview by Artinfo in 2007:
".....Well, yes, painting is my medium, but I’ve made something like 80 or 90 prints. The Worshipper is from something that I saw in the [International Carnival and] Mask Museum in Binches in Belgium, while I was preparing another show about Gilles de Binches. [This carnival, protected by UNESCO, is supposedly the oldest carnival in the world.] While I was doing the research for that, I went to the museum and I saw this sort of white doll. The image when I took a Polaroid of it came out very strange because of the flash: It appears to be very close to the wall, and it has a very strange shadow underneath the hand and next to the face. Also it erases the imagery of the figure. It looks very archaic, like he could very easily be a Russian orthodox priest. This gave me the idea of something strangely fanatical, and that’s why I called it The Worshipper."
Excerpt from http://www.artinfo.com/news/story/17171/luc-tuymans/