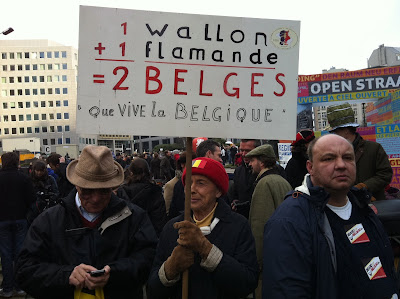 Picture by Dimitri Strobbe
From reactions I receive from readers, I realize that it is all but clear to many what is going on here in this country with language, politics, elections, and all the talk about federation versus confederation, etc. But let's stick to this blog's philosophy of steering clear of politics. Nevertheless, Dimitri's picture, which he took about two years ago in January 2011 at the occasion of the protest march "Shame" in Brussels, is as good a reason as any to give you some numbers here:
"Belgium is home to two main linguistic groups, the Dutch-speakers (about 60%), mostly Flemish, and the French-speakers (about 40%), mostly Walloons, plus a small group of German-speakers. Belgium's two largest regions are the Dutch-speaking region of Flanders in the north and the French-speaking southern region of Wallonia. The Brussels-Capital Region, officially bilingual, is a mostly French-speaking enclave within the Flemish Region. A German-speaking Community exists in eastern Wallonia. Belgium's linguistic diversity and related political conflicts are reflected in the political history and a complex system of government".
http://en.wikipedia.org/wiki/Belgium