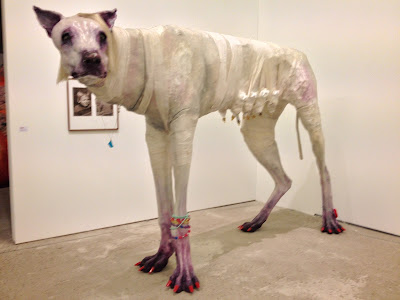 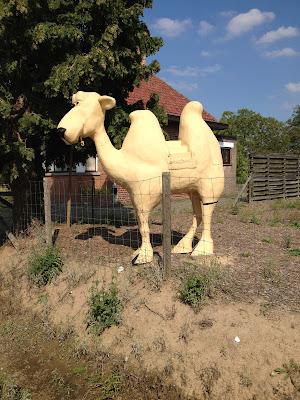 The first work 'Look at me' (2011)  is by  Polish artist Pawel Wocial.
"A large-scale sculpture that through its form, shape and posture, refers to the Capitoline Wolf from the beginning of the 5th century a symbol of the ancient empire".
"... a modern version of the Capitoline she-wolf, originally a symbol of the capital of the ancient Roman Empire. According to legend, the animal cared for and nourished the twin brothers who became the founders of Rome. Wocial’s wolf has undergone a metamorphosis; she has been stripped of her natural instincts and symbolic dimension. Look at Me is a critical statement on oppressive canons of beauty dictated by the media and popular culture. The work became the inspiration for a collection by Polish fashion and interior designer Maciej Zień, who included sculpture in the scenery of his fashion shows and reproduced images of the wolf on dresses and shirts".
http://www.culture.pl/web/english/events-calendar-full-page/-/eo_event_asset_publisher/L6vx/content/kunstenfestival-watou-2013
http://www.unit24.info/threads/
The second sculpture does not belong to the festival in the strict sense but was seen in someone's garden on the way to it.
Watou, a small village in Flanders famous for more than one reason. It has a population of only 1900. It was a quiet haven during World War I, situated just behind the lines.
Today, it is know for its summer modern arts festival "Kunstenfestival Watou".

"Watou is a village in West Flanders surrounded by verdant fields, with old-world charm and a thoroughly modern summer arts festival. Last week, the sun was smiling on visitors eager for the first day of the fifth annual Kunstenfestival Watou, a remarkably abundant blend of visual arts, poetry and music that anchors itself modestly in humanity’s “collected histories. This year’s event is called Concerning the Love We Don’t Understand, and it’s a curatorial triumph, placing the excellence and diversity of Flemish art in an international context alongside works by world-renowned artists such as Marina Abramovic, Tracey Emin and Louise Bourgeois, as well as artists from across Europe plus Russia, Algeria, Syria and Israel. It is clear that those things we do or do not understand about love unite us across boundaries, races, religions and cultures".