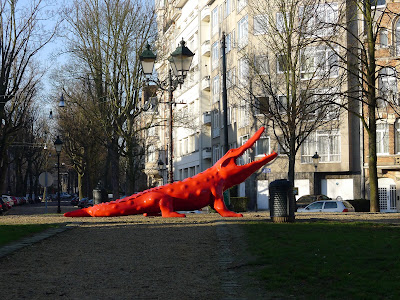 Sculpture by young French artist Richard Orlinski on square d'Arezzo in Brussels.
His sculptures are "built around the concept of "Born Wild", reflecting core values ​​in a contemporary style, which never yields to the trash, to extravagance or ephemeral. .. The challenge of Richard Orlinski through the concept "Born Wild" © is to transform the negative impulses vital positive emotions, to move from the primordial instinct to emotion civilized.

Supporter of the arts accessible to all, Richard Orlinski draws on popular imagery of the icons that serve his purpose.
The man and the crocodile have in common the reptilian brain, one of three human brains, a brain without memory governed by innate reflexes, the seat of our violent impulses. The crocodile, a species dating from the Mesozoic era, also symbolizes the adaptability and survivability".
http://galeriecannes.com/oeuvre_art_happy_art_gallery.php?id=368&page=2&langue=gb