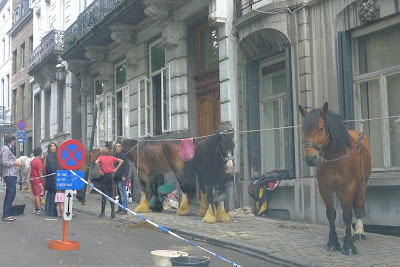 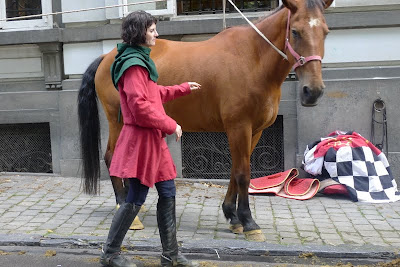 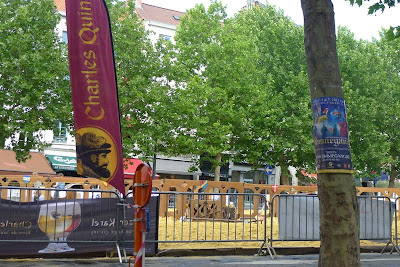 Today the Ommegang took place in Brussels. I have to admit that I had sort of forgotten about it and I regret not having taken the time for a decent photo session. These pictures were made somewhat in a hurry, I took them from my car, driving by the preparation of the festivities on the Sablon, where a medieval village was being created.

The Ommegang today is a time for festivities, fun, theater, shows, knights combat on foot and on horses. Grandiose spectacle and magnificent costumes of the times recreate history. The participants play the roles of Charles V, Mary of Austria etc, and are said to be their descendants or descendants of the nobility.

"The Ommegang was originally established to commemorate the transfer of the miraculous statue of "Notre-Dame sur la Branche", who was worshipped in the Antwerp Cathedral. Over the years this commemorative procession has lost its religious character and has become a parade whose aim is to show the different reliquaries of Brussels.
Nowadays the Parade of the Ommegang is one of the most awe-inspiring spectacles in Belgium. It takes place at 21h on the prestigious setting of the Grand'Place, which is ablaze with light and recalls the pomp and ceremony of a splendid celebration held there to honour Charles V and his Court (16th century)".
http://www.bruxelles-tourisme.be/informations/events_bruxelles__ommegang/en/E/19363.html
http://ommegang.be/index2.php?idx=2&lg=enhttp://ommegang.be/index2.php?idx=2&lg=en