The little red caboose at the Leuven fair 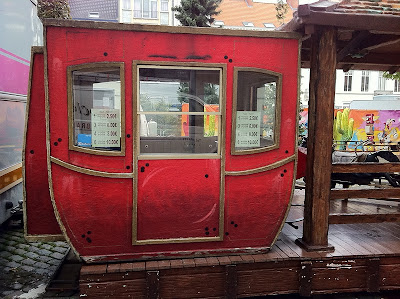 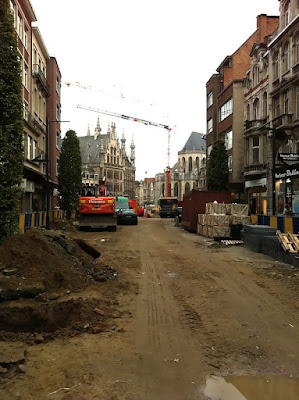 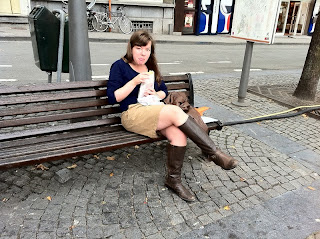 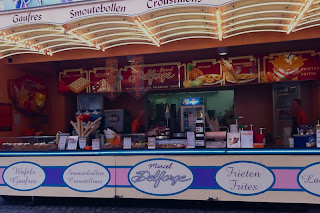 My blogger friend Genie author of fascinating "Paris and Beyond" http://www.blogger.com/profile/12758801373365481655,  challenged me with her comment on my previous "color purple" posting.  This is what Genie said : " you have had a colorful week so far... yellow and now purple. I can't wait to see what is next!"
I feel like I have no choice but to come up with something "red".

In one of my very favorite Belgian towns - Leuven, known for its ancient university and modern student population,  now totally uprooted by city works, I found a red caboose.
Leuven has a magnificent town hall, built between 1448 and 1469. I will certainly be back with one or more separate postings on the subject.
Every year in September, Leuven becomes home to a fair or kermesse in French and kermis in Dutch,  to the delight of the large youthful segment of the population,  especially since the new school year starts with a day off in honor of the fair.
The fair has bumper cars, a ghost palace, frites (french fries), waffles and smoutebollen (a rather greasy doughnut type of food which one eats in a paper bag like fries), all kinds of noisy rides,...
I was thrilled when I saw the  little red caboose which made me think of Genie but also reminded me of a children's book which I must have read a zillion times to my kids because it was their all time favorite. The book by Marian Potter tells the story of a little red caboose at the back of the train and its aspiration to become as strong as the engine at the front.